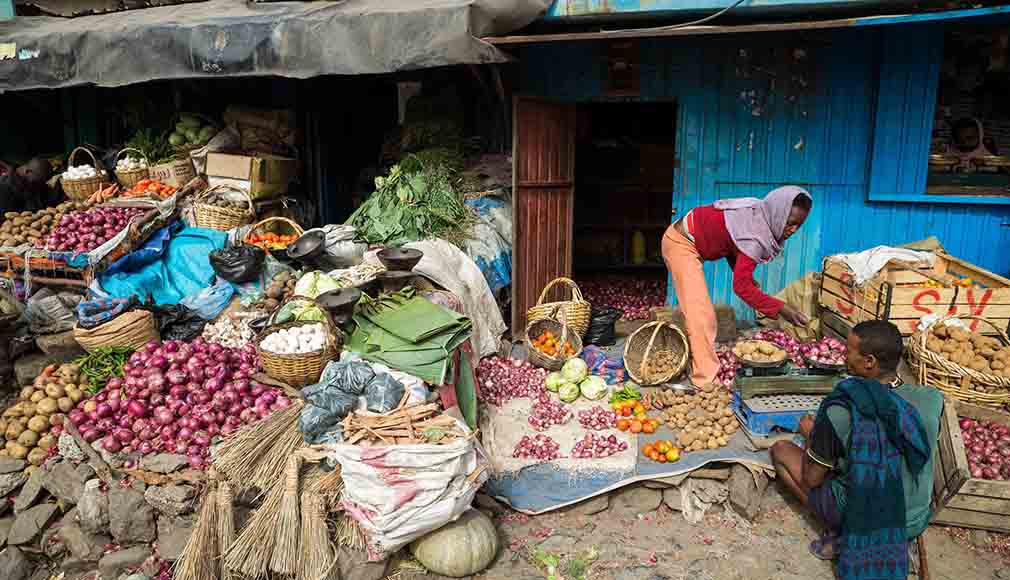 By William Davison in Addis Ababa | The Guardian

In the dense cobblestone streets of Burayu town, outside Addis Ababa, Melaku Abdella* and his family had been making a living selling basic items such as vegetables, cooking oil and soft drinks at competitive prices from their kiosk. But after the Ethiopian government stung him with a more than 300% tax increase last month, Abdella says he was left with no option but to close the business.

Like many low-income traders in the country’s Oromia region, the family didn’t keep accounts, meaning the authorities based their annual tax demand of 7,000 Ethiopian birr (£231) on an estimate of income. “It’s beyond my capacity to pay. I will have to hand in my business licence,” Abdella says.

The hikes on grocers, barbers and cafes were met with widespread anger and protests in parts of the volatile state, which has endured unrest and fatal clashes during the last two years.

The situation creates a dilemma for a government that is desperate to increase income tax and reduce its reliance on aid, but is also wary of further instability. Ethiopia’s parliament only lifted a 10-month state of emergency earlier this month following protests over land disputes and alleged political marginalisation. The unrest since November 2015 involved security forces killing at least 600 demonstrators and tens of thousands being jailed, according to the government.

Although still one of world’s least developed countries, Ethiopia’s economy has grown rapidly in the last decade, as the government used loans, aid and tax revenue to build clinics, universities, roads, railways and hydropower dams. Its budget has increased roughly in line with gross domestic product. Ethiopia’s tax revenue is around 14% of output, according to the International Monetary Fund, which is lower than the sub-Saharan African average. This financial year, almost a third of the federal budget of 321bn birr (£10.6bn) is projected to come from aid and loans.

Ethiopia’s ruling coalition has been credited for overseeing growth and improving infant mortality and life expectancy, but it is also blamed for suppressing democratic rights, maladministration, increasing corruption and, now, the draconian tax swoop.

The root of the dispute is a sizeable semi-formal economic sector – around 80% of the workforce is still employed in smallholder agriculture – entrenched mistrust between the state and traders, and an estimation system for small businesses.

Enterprises with an annual turnover of less than 500,000 birr are not required to produce audited accounts. Instead, officials visit each premise to make an income assessment. That has set up a game of cat-and-mouse with many vendors running down stock in anticipation of the visits. The result has been a large discrepancy between what traders say they earn and what their assessments are based on, even if they made an accurate verbal declaration. “What most people tell the government is too low, so the officials don’t believe anybody. Honesty does not work,” says one Burayu business owner, who also requested anonymity.

Oromia revenue officers take the estimation and multiply it either by 300 days for goods retailers or 360 days for services to produce a turnover estimate. Profits are calculated by applying a standard margin for each type of business, which is then taxed at marginal rates from 0% for profits of less than 7,200 birr to 35% for those earning more than 130,800 birr.

“The assessment has basic technical problems. From the selection of people to assess, to the criteria used for assessment, it does not fit into any objective presumptive tax assessment methodology. It’s just an ad hoc categorisation of taxpayers,” says business consultant Getachew Teklemariam.

At Burayu town revenue department, deputy head Samuel Tadesse explains that business owners were shocked at the new evaluations because the government hadn’t carried out an assessment for seven years.

Annual inflation shot up to 40% in 2011, but has been hovering near 10% recently. Also, last year, the tax thresholds increased. For example, the tax-exempt portion rose from 1,800 birr to 7,000, while the upper margin was previously 60,000. “They are confused because for six years they paid a similar amount,” Tadesse says.

By Lake Hora in Bishoftu town, about 50km south-east of Addis Ababa, a man in a bright yellow T-shirt and matching sunglasses repairs a door with a soldering iron and angle grinder amid a shower of sparks. He’s given up on his business after a 13,000-birr tax bill that he believes was four times what it should have been, and is using a friend’s workshop. “It’s better to be mobile, going here and there. That is better than being licensed,” he says.

Others in the area say the levies on small businesses are another example that the system only works for the rich, who receive favours and tax breaks. Another small business owner believes access to jobs, land and controlled commodities such as sugar requires loyalty to the ruling party. The welder thinks the government wants the extra revenue to buy weapons – one of a number of conspiracy theories about the tax policy, testament to the extent of Oromo discontent, and the difficulty the authorities will have implementing unpopular policies. Protests over the tax, which closed businesses in July, have merged with other grievances and led to widespread strikes in Oromia last week.

Back in Burayu, rather than risk an unaffordable tax demand next year, Abdella says he will try to support his family by working in the construction industry. He has no faith that the ruling coalition will change its ways to make life easier for small businesses. “I don’t think there will be a solution if this government stays,” he says.