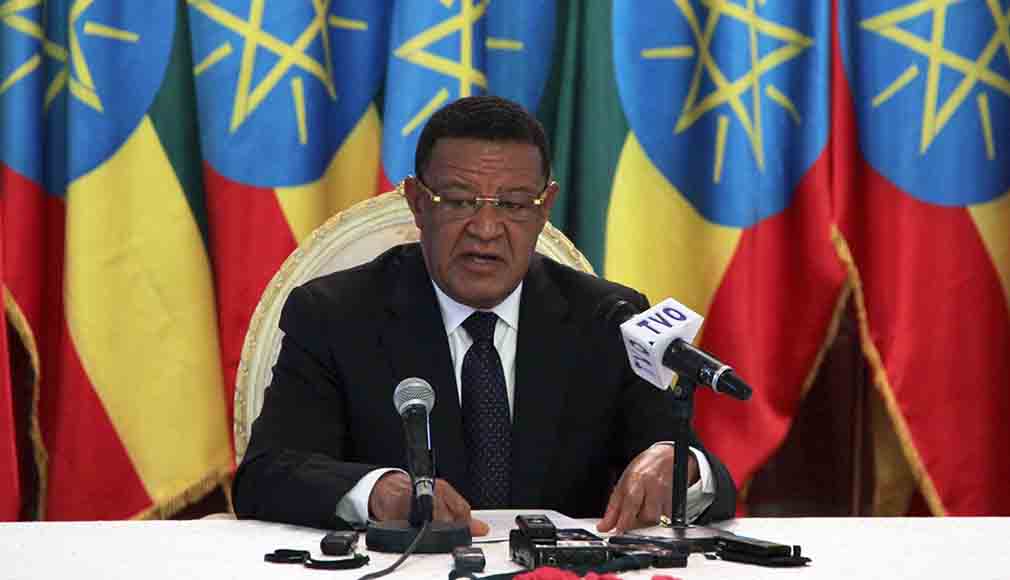 “A warm friendship connects the Ethiopian and American people,” U.S. Secretary of State Rex Tillerson announced earlier this year. “We remain committed to working with Ethiopia to foster liberty, democracy, economic growth, protection of human rights, and the rule of law.”

Indeed, the website for the U.S. Embassy in Ethiopia is marked by press releases touting U.S. aid for farmers and support for public health infrastructure in that East African nation. “Ethiopia remains among the most effective development partners, particularly in the areas of health care, education, and food security,” says the State Department.

Behind the scenes, however, Ethiopia and the U.S. are bound together by long-standing relationships built on far more than dairy processing equipment or health centers to treat people with HIV. Fifteen years ago, the U.S. began setting up very different centers, filled with technology that is not normally associated with the protection of human rights.

In the aftermath of 9/11, according to classified U.S. documents published Wednesday by The Intercept, the National Security Agency forged a relationship with the Ethiopian government that has expanded exponentially over the years. What began as one small facility soon grew into a network of clandestine eavesdropping outposts designed to listen in on the communications of Ethiopians and their neighbors across the Horn of Africa in the name of counterterrorism.

In exchange for local knowledge and an advantageous location, the NSA provided the East African nation with technology and training integral to electronic surveillance. “Ethiopia’s position provides the partnership unique access to the targets,” a commander of the U.S. spying operation wrote in a classified 2005 report. (The report is one of 294 internal NSA newsletters released today by The Intercept.)

The NSA’s collaboration with Ethiopia is high risk, placing the agency in controversial territory. For more than a decade, Ethiopia has been engaged in a fight against Islamist militant groups, such as Al Qaeda and Shabab. But the country’s security forces have taken a draconian approach to countering the threat posed by jihadis and stand accused of routinely torturing suspects and abusing terrorism powers to target political dissidents.

“The Ethiopian government uses surveillance not only to fight terrorism and crime, but as a key tactic in its abusive efforts to silence dissenting voices in-country,” says Felix Horne, a senior researcher for Human Rights Watch. “Essentially anyone that opposes or expresses dissent against the government is considered to be an ‘anti-peace element’ or a ‘terrorist.’”

In February 2002, the NSA set up the Deployed Signals Intelligence Operations Center – also known as “Lion’s Pride” – in Ethiopia’s capital, Addis Ababa, according to secret documents obtained by The Intercept from the whistleblower Edward Snowden. It began as a modest counterterrorism effort involving around 12 Ethiopians performing a single mission at 12 workstations. But by 2005, the operation had evolved into eight U.S. military personnel and 103 Ethiopians, working at “46 multifunctional workstations,” eavesdropping on communications in Somalia, Sudan, and Yemen. By then, the outpost in Addis Ababa had already been joined by “three Lion’s Pride Remote Sites,” including one located in the town of Gondar, in northwestern Ethiopia.

“[The] NSA has an advantage when dealing with the Global War on Terrorism in the Horn of Africa,” reads an NSA document authored in 2005 by Katie Pierce, who was then the officer-in-charge of Lion’s Pride and the commander of the agency’s Signal Exploitation Detachment. “The benefit of this relationship is that the Ethiopians provide the location and linguists and we provide the technology and training,” she wrote. According to Pierce, Lion’s Pride had already produced almost 7,700 transcripts and more than 900 reports based on its regional spying effort.

Pierce, now a lieutenant colonel in the Army Reserve and a lawyer in private practice, had noted her role with the NSA’s Ethiopia unit in an online biography. When contacted by The Intercept, she said little about her time with Lion’s Pride or the work of the NSA detachment. “We provided a sort of security for that region,” she said. The reference to the NSA in Pierce’s online biography has since disappeared.

Reta Alemu Nega, the minister of political affairs at the Ethiopian Embassy in Washington, D.C., told The Intercept that the U.S. and Ethiopia maintained “very close cooperation” on issues related to intelligence and counterterrorism. While he did not address questions about Lion’s Pride, Alemu described regular meetings in which U.S. and Ethiopian defense officials “exchange views” about their partnership and shared activities.

Lion’s Pride does not represent the first time that Ethiopia has played a vital role in U.S. signals surveillance. In 1953, the U.S. signed a 25-year agreement for a base at Kagnew Station in Asmara, Ethiopia (now the capital of Eritrea), according to a declassified NSA report obtained by the nonprofit National Security Archive. Navy and Army communications facilities based there were joined by an NSA outpost just over a decade later.

On April 23, 1965, the Soviet Union launched Molniya-1, its first international communications satellite. The next month, the NSA opened STONEHOUSE, a remote listening post in Asmara. The facility was originally aimed at Soviet deep space probes but, in the end, “[its] main value turned out to be the collection of Soviet MOLNIYA communications satellites,” according to a 2004 NSA document that mentions STONEHOUSE.

STONEHOUSE was closed down in 1975 due to a civil war in Ethiopia. But its modern-day successor, Lion’s Pride, has proved to be “such a lucrative source for SIGINT reports” that a new facility was built in the town of Dire Dawa in early 2006, according to a secret NSA document. “The state of the art antenna field surrounded by camels and donkey-drawn carts is a sight to behold,” reads the NSA file. The effort, code-named “LADON,” was aimed at listening in on communications across a larger swath of Somalia, down to the capital Mogadishu, the Darfur region of Sudan, and parts of eastern Ethiopia.

At a May 2006 planning conference, the Americans and Ethiopians decided on steps to “take the partnership to a new level” through an expanded mission that stretched beyond strictly counterterrorism. Targeting eastern Ethiopia’s Ogaden region and the nearby Somali borderlands, the allied eavesdroppers agreed on a mission of listening in on cordless phones in order to identify not only “suspected al-Qa’ida sympathizers” but also “illicit smugglers.”

“It is very troubling to hear the U.S. is providing surveillance capacities to a government that is committing such egregious human rights abuses in that region.”

From the time Lion’s Pride was set up until predominantly Christian Ethiopia invaded mostly Muslim Somalia in December 2006, the U.S. poured about $20 million in military aid into the former country. As Ethiopian troops attempted to oust a fundamentalist movement called the Council of Islamic Courts, which had defeated several warlords to take power in Somalia, Pentagon spokesperson Lt. Cmdr. Joe Carpenter said the two nations had “a close working relationship” that included sharing intelligence. Within a year, Ethiopian forces were stuck in a military quagmire in Somalia and were facing a growing rebellion in the Ogaden region as well.

“While the exact nature of U.S. support for Ethiopian surveillance efforts in the Ogaden region is not clear, it is very troubling to hear the U.S. is providing surveillance capacities to a government that is committing such egregious human rights abuses in that region,” says Horne, the Human Rights Watch researcher. “Between 2007-2008 the Ethiopian army committed possible war crimes and crimes against humanity against civilians in this region during its conflict with the Ogaden National Liberation Front.”

For the U.S., “the chaos” caused by the invasion “yielded opportunities for progress in the war on terrorism,” stated a top secret NSA document dated February 2007. According to the document, the Council of Islamic Courts was harboring members of an Al Qaeda cell that the NSA’s African Threat Branch had been tracking since 2003. After being flushed from hiding by the Ethiopian invasion, the NSA provided “24-hour support to CIA and U.S. military units in the Horn of Africa,” utilizing various surveillance programs to track Council of Islamic Courts leaders and their Al Qaeda allies. “Intelligence,” says the document, “was also shared with the Ethiopian SIGINT partner to enable their troops to track High Value Individuals.” The NSA deemed the effort a success as the “#1 individual on the list” was “believed killed in early January” 2007, while another target was arrested in Kenya the next month. The identities of the people killed and captured, as well as those responsible, are absent from the document.

As the Council of Islamic Courts crumbled in the face of the invasion, its ally, the militant group Shabab, saw Somalis flock to its resistance effort. Fueled and radicalized by the same chaos exploited by the NSA, Shabab grew in strength. By 2012, the terrorist group had formally become an Al Qaeda affiliate. Today, the U.S. continues to battle Shabab in an escalating conflict in Somalia that shows no sign of abating.

At the time the NSA set up Lion’s Pride, the U.S. State Department had criticized Ethiopia’s security forces for having “infringed on citizens’ privacy rights,” ignoring the law regarding search warrants, beating detainees, and conducting extrajudicial killings. By 2005, with Lion’s Pride markedly expanded, nothing had changed. The State Department found:

A separate State Department report on Ethiopia’s counterterrorism and anti-terrorism capabilities, issued in November 2013 and obtained by The Intercept via the Freedom of Information Act, noted that there were “inconsistent efforts to institutionalize” anti-terrorism training within Ethiopian law enforcement and added that while the Ethiopian Federal Police use surveillance and informants, “laws do not allow the interception of telephone or electronic communications.” The readable sections of the redacted report make no mention of the NSA program and state that the U.S. “maintains an important but distant security relationship with Ethiopia.”

A 2010 NSA document offers a far different picture of the bond between the security agencies of the two countries, noting that the “NSA-Ethiopian SIGINT relationship continues to thrive.”

In an after-action report, a trainer from NSA Georgia’s “Sudan/Horn of Africa Division” described teaching a class attended by soldiers from the Ethiopian National Defense Forces and civilians from Ethiopia’s Information Network Security Agency. He praised the Ethiopians for “work[ing] so hard on our behalf” and wrote that his students were “excited and eager to learn.”

According to the documents, analysts from the Army’s 741st Military Intelligence Battalion were still detailed to Lion’s Pride while the Ethiopians they worked beside had increased their skills at analyzing intercepted communications. “More importantly, however,” the American trainer noted, “is the strengthening of the relationship” between NSA and Ethiopian security forces. NSA Georgia, he declared, was eager to continue “developing the relationship between us and our Ethiopian counterparts.”

The NSA refused to comment on whether Lion’s Pride continues to eavesdrop on the region, but no evidence suggests it was ever shut down. There is, however, good reason to believe that U.S. efforts have strengthened the hand of the Ethiopian government. And a decade and a half after it was launched, Ethiopia’s human rights record remains as dismal as ever.

Documents published with this article: