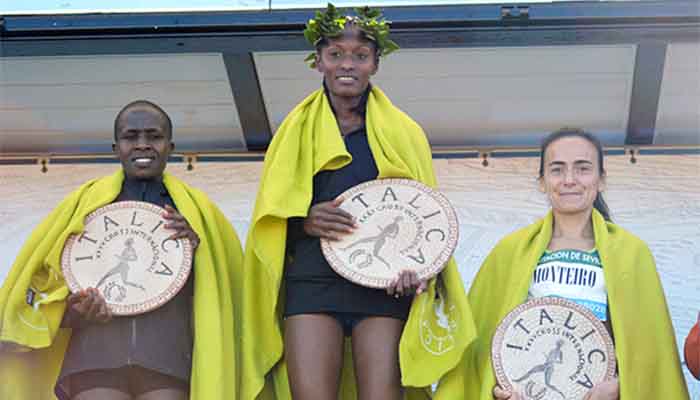 Ethiopia’s Senbere Teferi and Bahrain’s Aweke Ayalew, of Ethiopian origin, captured outstanding victories at the 35th Cross Internacional de Itálica in Santiponce, near the Spanish city of Seville, when winning Sunday (Jan. 15) the women’s (8.1km) and men's (10.8km) with a time of 25:52 and 31:34, respectively. Tafese Soboka of Ethiopia finishes third in men’s.

The Ethiopian Senbere Teferi, runner-up in the world of 5000 meters in Beijing in 2015, clearly prevailed the 35th Cross Internacional de Itálica disputed Sunday, in which maintained an athletic monologue unrivalled in the last kilometres. Not even the meters that did more to make a mistake on the road to goal or the opposition of Ruth Jebet, Bahrain, Olympic champion of 3,000 obstacles and world record holder of distance, could counteract the dominance that Senbere showed in the archaeological complex of Santiponce.

Third was the Portuguese Inés Monteiro, who was a few months away from athletics because of her motherhood and gradually returned to the international scene, while Trihas Gebre, who had occupied the third position for most of the race with Monteiro, was also surpassed in the final straight for Ana Lozano, who became the first Spaniard in goal (fourth overall). In fact, Gebre, with some physical problems in the last meters, collapsed when he crossed the finish line and had to be taken care of and removed on a stretcher. Gema Martín and Nuria Fernández were sixth and seventh, respectively.

Aweke, who won this season in Atapuerca, made his big momentum to overcome in the last meters his rivals. Eritrea’s Teklemariam Medhin finished 2nd place with a time of 31:42 and Ethiopia’s Tafese Soboka third in 31:44.

The event, included in the IAAF international calendar, has been used to prepare many athletes for the World Championship in Kampala, Uganda, in March.