Kenenisa Bekele Falls at Start, Gets Injured, and Later Drops Out of the Dubai Marathon 2017

The biggest news at the world’s richest prize money marathon happened at the start. Kenenisa Bekele, the world record holder at 5,000m and 10,000m and the second fastest man in a record eligible marathon, fell at the start. Bekele’s fall was not picked up on the race broadcast, but the runners were not given an advance countdown and were crammed close together with the entire field right up on the professional runners.

After the race, Bekele’s manager said on the broadcast, that Bekele’s arm was bloodied in the fall and he injured his calf, but the details were not totally known. To viewers watching the race there was little evidence early on Bekele was injured because he soon caught the leaders and they were on a suicidal pace.

Bekele was clearly slowing and he’d reach halfway in 1:02:48 and soon after drop out grabbing his left calf. 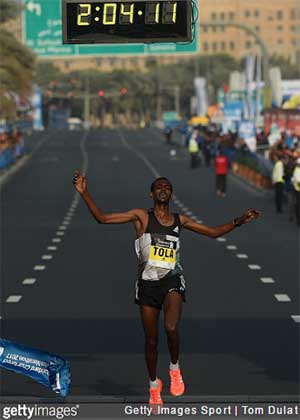 Olympic 10,000-meter bronze medallist Tamirat Tola of Ethiopia won the race in 2:04:10 by an amazing 2 minutes and 36 seconds as the rest of the field fell apart due to the fast opening pace. By winning, Tola claimed the richest first-place prize in global marathoning: $200,000.

There’s nothing wrong with running a 62:48 half marathon before your major marathon goal (2017 London).

Given the fact that Bekele has struggled with Achilles issues in the past, the fact that Bekele was grabbing his lower left leg when he dropped out was a major worry when he initially dropped out, but the fact that we later learned that he fell at the start makes us feel a little bitter. A short-term injury won’t hurt him for London – heck dropping out might even help him as he’s not spent from a marathon – but a long-term one is a concern.

Marathon fans are left to wonder what if Bekele hadn’t fallen. While we think the conditions were too hot for a world record, Bekele’s manager Jos Hermens disagreed after the race on the broadcast. He said with the cloud cover and lower than expected temperatures compared to from earlier in the week they were “perfect conditions.” We totally disagree. He noted that Bekele is a much better marathoner than Tola. That was true in the past for sure. Hermens said on the broadcast, “Kenenisa is not one to bluff and say I’ll do it (break the world record), unless he can do it.”

Prize money (men’s and women’s are the same): 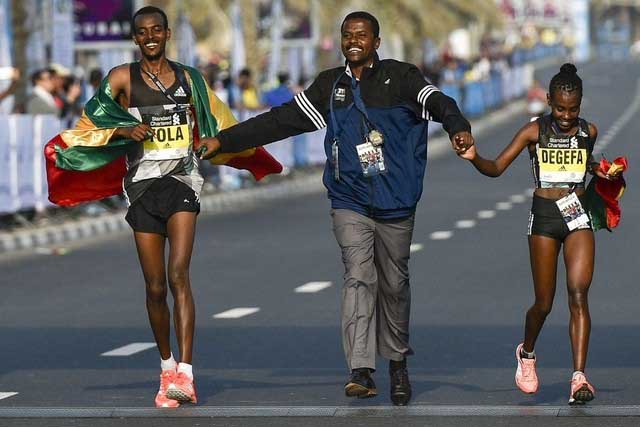 Ethiopian runners Worknesh Degefa, right, and Tamirat Tola, left, celebrate after winning the Dubai marathon on January 20, 2017. Middle-distance legend Kenenisa Bekele, who was aiming to add the marathon world record to his 5,000 metres and 10,000 metres records, limped out of the Dubai event after a fall. AFP / STRINGER