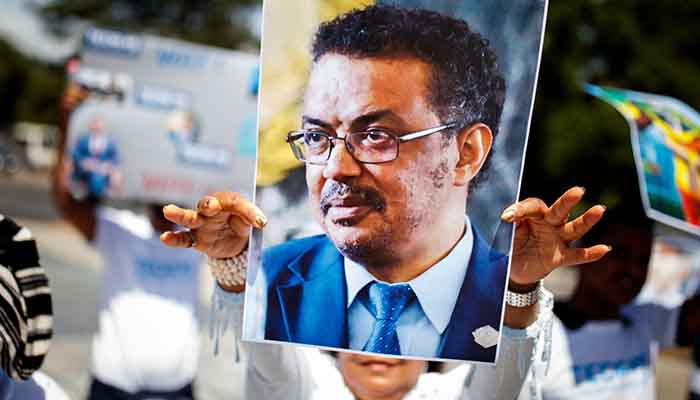 The New York Times — Tedros Adhanom Ghebreyesus of Ethiopia was voted director general of the World Health Organization on Tuesday, the first African ever to head the agency.

The election was the first conducted by the W.H.O. under more open and democratic rules. After nearly two years of public campaigning, originally by six candidates, the voting took place in a closed-door session in which the health ministers of 186 countries cast their ballots in secret.

Dr. Tedros — a malaria expert who campaigned under his first name — ultimately beat Dr. David Nabarro of Britain after three voting rounds. The final tally was 133 votes to 50, with three abstaining or not voting. Dr. Sania Nishtar, a Pakistani cardiologist and expert in noncommunicable diseases, was eliminated after receiving 38 votes in the first round.

Dr. Tedros, 52, replaces Dr. Margaret Chan of China, who has held the post for a decade.

He is best known for having drastically cut deaths from malaria, AIDS, tuberculosis and neonatal problems when he was Ethiopia’s health minister. He trained 40,000 female health workers, hired outbreak investigators, improved the national laboratory, organized an ambulance system and oversaw a tenfold increase in medical school graduates.

He promised as the head of W.H.O. to pursue health insurance in even the poorest nations, strengthen emergency responses and make the agency more accountable and transparent.

He backs greater access to birth control and preventive care for women and is committed to having more gender and ethnic diversity in the agency. He also has promised to fight the health effects of climate change.

Dr. Nabarro, 67, has led the campaigns of various United Nations agencies against avian and swine flu, cholera, Ebola, malaria, hunger and other crises.

“It’s a joy, the continent is celebrating at last,” said Janine Barde, a Rwandan delegate, flashing a victory sign to another African representative. “I feel stakeholders are now in charge, not bureaucrats.”

The race, which began in 2015, turned bitter in recent weeks as an adviser to Dr. Nabarro accused Dr. Tedros of having covered up repeated outbreaks of cholera in Ethiopia, which may have delayed the international response and, more recently, the use of a cholera vaccine there.

Dr. Tedros was also accused of complicity in his country’s dismal human rights record, which includes massacring protesters and jailing and torturing journalists and political opponents.

Dozens of Ethiopians opposed to his candidacy demonstrated outside the Palace of Nations in Geneva, where the vote took place, and one person who interrupted the proceedings was escorted out.

Dr. Tedros is from the Tigray tribe, which holds political power in Ethiopia; many protesters are from the rival Amhara and Oromo tribes.

Although the W.H.O. directorship is the pre-eminent health policy post in the world — one in which bold leadership can turn the tide against epidemics — the organization itself is in peril.

The agency was accused of fumbling the response to the 2014 Ebola epidemic, and it is seriously underfinanced.

Dues from member countries make up less than third of its $2.2 billion budget. The rest comes from large donors, including the United States, Britain, the Bill & Melinda Gates Foundation, Rotary International and Norway.

Some of that money comes with strings attached, directing the organization to pursue specific projects, like polio eradication.

The United States is its largest donor. But President Trump has shown little interest in the United Nations and has strongly suggested that his administration will push for funding cuts.

Dr. Tom Price, the secretary of health and human services, issued a statement congratulating Dr. Tedros. He did not threaten any cuts, but focused heavily on the need for change at the W.H.O., saying all members “must commit to further enhancing the transparency and accountability” of the agency.

Dr. Thomas R. Frieden, who until recently led the Centers for Disease Control and Prevention and who came to Dr. Tedros’s defense last week in a letter to The New York Times, called him “an excellent choice.”

“Precisely the same thing is needed to make W.H.O. effective,” he added.

The W.H.O. is accused of fostering a culture in which bureaucrats live comfortably on tax-free United Nations salaries in Switzerland while making constant appeals for money to fight epidemics.

On Sunday, The Associated Press released a scathing report, based on internal W.H.O. documents, on its travel spending.

The report said the $200 million the agency spent on travel each year was more than it devoted to AIDS, tuberculosis, malaria and tuberculosis combined. Staff members, it said, routinely broke internal rules against flying business class and staying in luxury hotels.

Because donors are skeptical, many tasks that might naturally belong to the W.H.O. have been shifted to other agencies.

For example, the Global Fund to Fight AIDS, Tuberculosis and Malaria is now the main conduit for fighting those diseases and raises about $5 billion a year. The Seattle-based Institute for Health Metrics and Evaluation, which is funded by the Gates foundation, produces independent analyses of global death and disease rates.

Nonetheless, the W.H.O. remains essential during crises. Only it can declare a global public health emergency, which tends to stir member states to action.

And when hundreds of doctors and nurses, sometimes in military uniforms, must enter a small country to help defeat an outbreak — as happened during the Ebola epidemic in West Africa in 2014 — the W.H.O. provides the diplomatic cover necessary for those doctors to be seen by locals as medical peacekeepers, rather than invaders.

The agency also oversees cooperation among national laboratories, turning them into a vast surveillance network for fast-moving diseases like avian flu. It also sets global medical standards needed by poor countries, such as declaring which inexpensive generic drugs are safe and what are the best treatments for emerging diseases.

Lawrence O. Gostin, a professor of law and public health at Georgetown University Law School and the informal adviser to Dr. Nabarro’s campaign who accused Dr. Tedros of covering up cholera outbreaks, said he “really wanted him to succeed.”

He also hoped Dr. Tedros would “make a clear statement of the importance of human rights and rapid reporting of outbreaks.”

Amir Attaran, a University of Ottawa expert on law and global health, called Dr. Tedros “a good choice because he was very diligent on malaria,” but argued that geopolitics played a greater role than personalities in the election.

“Choosing an African to head W.H.O. was past time,” he said. “And Britain is in the doghouse for choosing Brexit and undermining global stability — it’s their Guantánamo, their Tiananmen.”