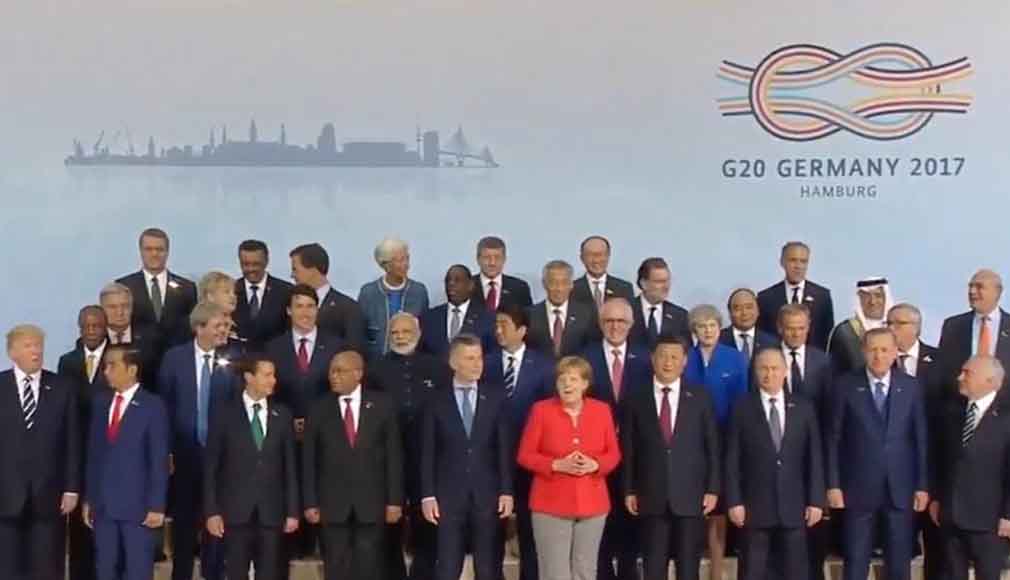 “I think it’s very clear that we could not reach consensus, but the differences were not papered over, they were clearly stated.” – Angela Merkel, BBC News, Jul 8, 2017

Such gatherings and summits are not always smooth, but on a planet bearing witness to a Trump presidency, there was always going to be a chance for more excitement at the G20 meet at Hamburg. Storm clouds have been brewing over economics, trade, and security, and these threatened to open with a deluge of resentment and threat. As proceedings continued, a general sense did eek through discussions: the G20 would have been far more appropriately termed the G19+1.G20, Angela Merkel, Donald Trump, Vladmir Putin, EU, US

Opening shots suggesting this discord came from Jean-Claude Juncker, who described the EU as being in “elevated battle mood” at the US slide towards protectionism, notably on promises to protect the steel industry.

“I won’t want to tell you in detail what we’re doing. But what I would like to tell you is that within a few days – we won’t need two months for that – we could react with countermeasures.”[1]

Germany’s Angela Merkel has also expressed concern on several fronts. Prior to the summit, she insisted that US departure from the Paris climate accord made Germany, and the EU “more determined than ever to lead it to success.” By virtue of circumstance, she has become the anti-Trump alternative, drawing enthusiastic moths to her veteran flame.

In a classic abdication of analytical responsibility, media outlets have become “handshake” watchers, pioneering a new field of irrelevance in what not to say. How would the handshake between Russia’s Vladimir Putin and US President Donald Trump pan out? Would Merkel actually receive one? Would Trump return for a vigorous “rematch” with Macron?[2]

A survey from Vox was a gaze-and-a-half. Emmanuel Macron of France and Justin Trudeau of Canada gave “adoring” treatment to the German Chancellor. Putin “mansplained” himself, causing Merkel’s eyes to “roll”.[3]

All eyes were on Trump-Putin, though there wasn’t much to go on, at least on the surface of the anticipated encounter. Trump gave journalists the usual serving:

“We look forward to a lot of very positive things happening for Russia, for the United States and for everyone concerned.”

He then claimed it was, “an honour to be with you.”

“I’m delighted to be able to meet you personally Mr President. And I hope as you have said, our meeting will yield concrete results.”

Such results were two-fold: a concession to Russia having not been involved in hacking the presidential elections last year; and a ceasefire deal affecting southwestern Syria.

The leaders have been engaged in a shadow play, with Trump’s admiration for Putin tempered by the necessities of imperial disapproval from establishment hacks. On Thursday, the US president insisted that Russia was a destabilising force and testing the resolve of the Western powers.

Russia was to “crease its destabilising activities in Ukraine and elsewhere, and its support for hostile regimes including Syria and Iran”. Sounding like a heavily scripted necessity, Trump suggested Russia “join the community of responsible nations in our fight against common enemies and in the defence of civilisation itself”.

When things did get down to the matter of business, an often sterile affair notable for what it omits, the G20 Leaders’ Declaration, optimistically claiming to shape “an interconnected world” suggested much in the way of disconnection. Old canards, albeit shaken ones, persist.

“Expanding on the results of previous presidencies, in particular the 2016 G20 Summit in Hangzhou, we decide today to take concrete actions to advance the three aims of building resilience, improving sustainability and assuming responsibility.”[4]

There were the usual nostrums: globalisation had to be shared in its benefits, though this has slowed; markets had to be kept open (a poke at protectionism), though there was recognition “that the benefits of international trade and investment have not been shared widely enough.”

But just to emphasise how things have nudged, of only a little, away from the obsession with open markets, the communiqué did note that states had a right to protect their own markets. How that objective fits within the religion of free trade is more than problematic.

The same went for the acknowledgment of the sovereign right of states on the issue of controlling refugee and migrant flows, a situation that simply perpetrates an ongoing parochial order based on “national interests and national security”. Responsibility seemed less relevant.

The global financial system had to be rendered resilient through reform; greater financial transparency and international tax cooperation had to be fostered (the shadow of the Panama papers looms).

Then came the issue of climate change. Yes, the members remained “collectively committed to mitigate greenhouse gas emissions” through a range of technologies using clean, efficient energy. But the elephant in the room did get described: “We take note of the decision of the United States of America to withdraw from the Paris Agreement.” The reaction, one couched in a diplomatic slap, was that the “Paris Agreement is irreversible.”

On the ground, protesters were keeping the authorities busy. The agendas there were standard ones, but have been given a certain punchiness since 2016. Figuring prominently in the gallery of detested subjects: Trump, Putin, wealth inequalities and climate change. Such points were expressed through looting, setting fire to vehicles, and violent encounters with the police.

In sum, another summit with little resolution, another indicator of a fractured international community, with more, rather than less discordance, to come. Trump was pleased enough:

“Law enforcement & military did a spectacular job in Hamburg. Everybody felt totally safe despite the anarchists.”

How flattering for the otherwise toothless anarchists.

Dr. Binoy Kampmark was a Commonwealth Scholar at Selwyn College, Cambridge. He lectures at RMIT University, Melbourne. Email: This email address is being protected from spambots. You need JavaScript enabled to view it..