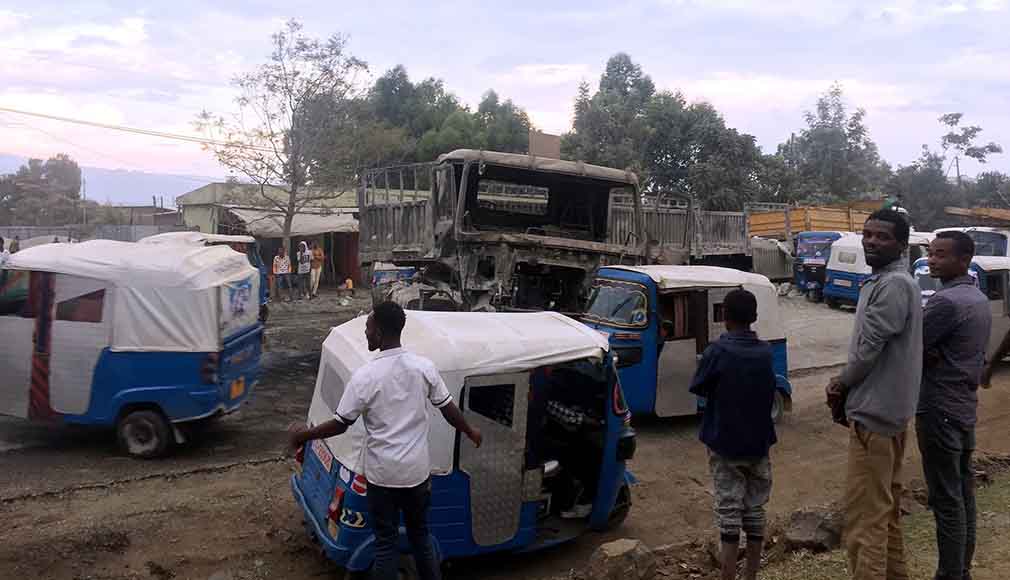 By Tom Gardner in Ambo

A brutal crackdown on protest and the return of soldiers to the streets of Oromia region has fuelled growing anger and frustration with central government.

It began with a rumour. On 25 October, residents of Ambo, 120km west of the Ethiopian capital, Addis Ababa, heard word on social media that a shipment of smuggled sugar was due to pass through town.

“Sugar is so expensive now, the price has tripled,” explains 18-year-old Israel, a first-year undergraduate at Ambo University. “And they’re exporting it to other parts of the country but the people here don’t have any. It’s not fair.”

So Israel joined the large crowd of young men and women that erupted in protest as three trucks rolled down the high street later that day, seizing hold of the vehicles and setting up roadblocks. He threw stones in the ensuing confrontation with police and covered his face with a scarf to avoid the teargas launched in his direction. And he watched in fear as the national military entered the town that evening and, the next morning, began firing live bullets, killing 10 people and injuring more.

“They were shooting at us with silencers on,” he says. “One of the boys killed was only 15. They killed girls too – one was my friend. A lot of my friends have died.”

The sugar rumour and the tragic events it sparked exposed the bitter web of grievance felt by many in Ambo and the surrounding region of Oromia, home to Ethiopia’s largest ethnic group: anger at what is perceived to be an unequal distribution of the country’s wealth, a pervasive sense of ethnic marginalisation, frustration with the endemic corruption that facilitates crime and contraband, and, above all, a deep mistrust of the authoritarian federal government in Addis Ababa.

Protests and strikes have resumed across Oromia since a nine-month state of emergency intended to quell them was lifted in August. In September hundreds of Oromos were killed and tens of thousands displaced amid an outbreak of sustained violence along Oromia’s border with the neighbouring Somali region. And reports of communal clashes in other parts of the country have emerged in recent weeks.

But for many the return of violence to Ambo’s streets was especially significant: it is the symbolic home of the Oromo struggle.

“Ambo is the heartbeat of the revolution,” says Bilisuma Deberie, a former Oromo activist and political prisoner now living in Addis Ababa. “It is where it all began.”

Since the October protest, federal police have been stationed in Ambo and other towns along the road to Addis Ababa, some of which experienced similar confrontations between security forces and protesters in the days that followed. Ambo is once again occupied by military troops, whose street patrols bring back unpleasant memories of life under emergency rule.

“They walk around the city with their guns, intimidating people,” says Galana, a student in health science at the university. “People are afraid.”

Shops and businesses were shut for several days after the unrest. Classes at schools and universities were suspended for a week, as students protested against the extra police presence on campus.

“Students fear for their lives,” says Galana’s friend, Ganeti, also a student at the university. “Some don’t want to come to class.”

Though they avoided joining the protests for fear of violence, both sympathise with the cause. In particular, they echo many in Ambo and elsewhere in expressing anger at the mass displacement of Oromos from the Somali region, and outrage at the perceived failure of the central government to protect them from what survivors say were unprovoked attacks and human rights abuses by Somali regional security forces.

In the weeks running up to the protests many of the displaced had arrived in Ambo and the surrounding area seeking shelter.

The fact that the military were sent quickly into Ambo has fuelled suspicions about the motives of the central government. Gadisa Desalegn, head of the town’s communication bureau, says he doesn’t know where the order for the intervention came from. “The people are demanding an answer,” he says.

Since the uprising, the town has been gripped by speculation and conspiracy theory – fed in part by social media – and many now believe the protests were the work of outsiders sent by the central government to incite violence to justify reimposing emergency law.

“The sugar rumour was intentionally circulated to provoke unrest,” says Habtamu Wondemagne, a 28-year-old rickshaw driver. “Sugar always comes through this town – there’s nothing unusual about that.”

He points to two burnt-out trucks on Ambo’s main road and, like other young men in the town, says it was the military, not protesters, who set them alight during the unrest. “This was not a genuine protest,” he says.

The belief that outsiders are responsible for destabilising the region is common across Oromia, strengthened by the mass arrests of largely non-Oromos by the regional government in recent weeks, which has led to concerns that minorities in the area are being targeted unfairly.

Others blame the protests on members of the new Oromo regional administration, pointing to an upsurge in ethno-nationalist sentiment across Oromia in recent months. “A wing has emerged within the leadership that plays the ultra Oromo-nationalist card and could be behind this unrest,” argues René Lefort, a longtime observer of Ethiopian politics.

He is among those who argue that instability across Ethiopia stems in large part from the weakness of the central government and efforts of the various ethno-regional wings of the ruling coalition party, the Ethiopian People’s Ruling Democratic Front (EPRDF), to attain political pre-eminence.

But the most striking shift in Ambo and elsewhere in Oromia over the past year is the widespread popularity of the new regional leadership, with many singling out Lemma Megersa, the regional president, for approval.

“I love him,” says Israel, the young protester. “He is my life.”

Locals also note that demonstrations this year have been policed more peacefully by local security forces. The Oromo police, once seen as lackeys of the ruling party, are now widely considered allies in the struggle against the federal government.

For residents of Ambo, it is the assertiveness of this new government that best explains the brutality of the federal military in suppressing the October protest.

“Lemma and his administration are on the side of the people,” says Galana, the student. “The problem now is the central government.”