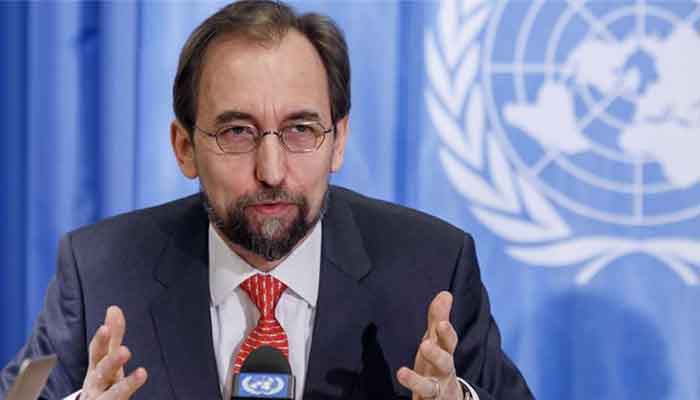 BY Abdur Rahman Alfa Shaban | AN

The UN rights chief arrived in the country today (April 2) on an official visit on the invitation of the Ethiopian government.

He has since held discussions with Dr. Addisu Gebre-Egziabher, Chairperson of the Ethiopian Human Rights Commission (EHRC). “Ethiopia is one of our partners in the Commission’s efforts to promote and protect human rights for all,” Zeid is quoted to have said during the discussion.

For his part, the EHRC chief said as a founding member of the UN Human Rights body, Ethiopia has been implementing human rights laws endorsed by the global outfit.

Zeid is also expected to meet other top government officials including Prime Minister Hailemariam Desalegn and speaker of the legislature, Abadula Gemeda.

He will also meet other ‘‘high-ranking Ethiopian officials, to discuss the human rights situation in Ethiopia and the work of the UN Human Rights Office in the country,’‘ a statement from his office confirmed late last week.

It is not clear yet whether the issue of sending independent investigators to probe the anti-government protest deaths will come up at any point. The UN has previously pushed for Ethiopia to allow it to send investigators but Addis Ababa has said it was capable of handling an impartial probe.

The EHRC recently released its report on the protests which hit three regions – predominantly the Amhara and Oromia regions. It stated that 669 people were killed during protests – out of which over 60 were security forces.

The country is currently under an extended state of emergency, which was imposed in October 2016 to quell the spreading protests. The government said there was the need for an extension to consolidate peace efforts so far.

Scheduled meeting with AU Chief and other top officials

As part of his visit, Zeid will also hold discussions with African Union Commission (AUC) Chairperson, Moussa Faki Mahamat on how to focus on plans to reinforce coordination between the UN and AU on human rights.

The two bodies recently signed an agreement aimed at strengthening their partnership. The signature in New York – by UN chief Antonio Guterres and Mahamat is a framework agreement on enhanced cooperation in peace and security.

At the end of his visit, on Thursday 4 May, the High Commissioner will hold a press conference at the UNECA Conference Centre at 16:00.