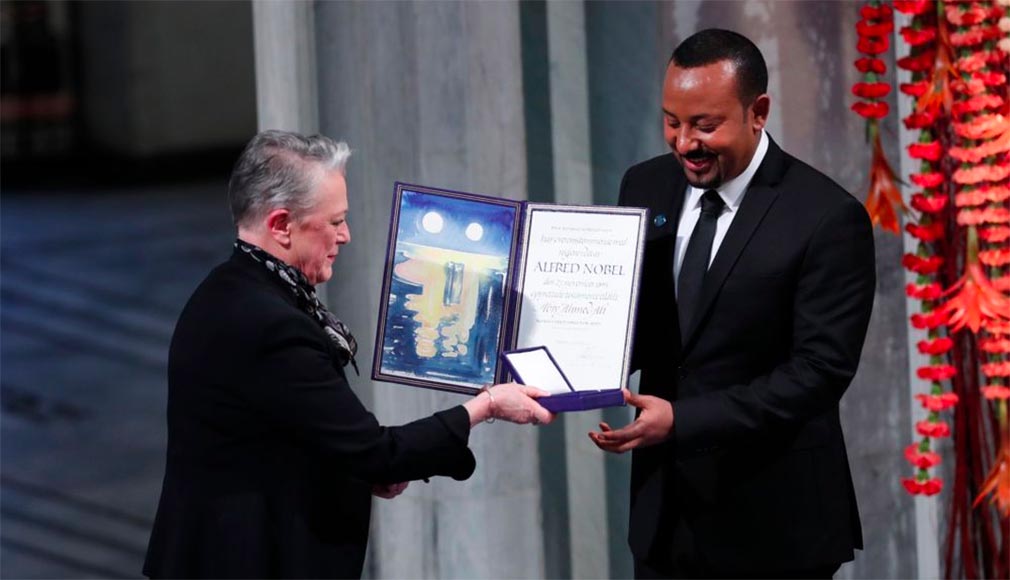 Oslo (EZ) - Ethiopian Prime Minister Dr. Abiy Ahmed took the steps on stage in Oslo City Hall and received the diploma and a gold medal as proof that he is the Nobel Peace Prize winner in 2019.

He then gave a speech on the driving forces that led him to begin the process of making peace with neighbouring Eritrea.

He emphasised the importance of putting away pride and arrogance in order to succeed. And how his goal is to use the best of his country's history to build a new society and a new civil society where tolerance, understanding and civilisation are words of honor.

The speech ended with standing ovations from the audience.

Prime Minister Abiy, the award bestowed upon you today rests on three major achievements. First, your crucial role in creating peace between Eritrea and Ethiopia. Second, your efforts to build democracy in Ethiopia by strengthening civil liberties and developing institutions. And third, but not least, the award is given to you for your contribution to peace and reconciliation processes in East and North East Africa.

For almost three decades, there has been serious discord between Eritrea and Ethiopia, at times even full war between the two countries. The hostilities have involved land disputes, military clashes along your common borders, and a permanent breach in diplomatic and political relations. Since 2002 it has developed into what has become known as a “no peace, no war” situation.

Prime Minister Abiy, you have been called the man of the moment, since during your first days in office as Prime Minister, you recognized the impetus which the transitional moment gave you and swiftly addressed the deadlocked situation. You seized the initiative and were the main architect behind the peace negotiations that were successfully conducted with Eritrea. However, without the positive response from President Isaias Afwerki, the conclusion of the two peace treaties would not have been possible.

This has brought several significant changes. The two nations of Eritrea and Ethiopia have in fact declared peace. That in itself is a major step forward. The peoples of the two countries are increasingly able to travel and reunite. Border disputes have been settled and demarcation lines have been drawn up in accordance with the arbitration ruling of an international boundary commission back in 2002. Political and diplomatic relations have been restored. However, much work remains to fully implement all the intentions of the peace agreements. Several important border crossings remain closed, and the peoples of Eritrea and Ethiopia therefore have limited access to one another. The peace agreements also incorporate ambitions of social, cultural and economic development. At present, this work seems to be at a stand-still. It is the hope of the Norwegian Nobel Committee that your previous achievements, coupled with the added encouragement of the Peace Prize, will spur the parties to further implementation of the peace treaties.

Dr. Abiy Ahmed, you were appointed Prime Minister in a country facing a multitude of challenges. Regional and ethnic divides have resulted in approximately three million internally displaced persons. These people are homeless within their own country and desperately need to return to their communities. You are also confronted with the daunting tasks of stimulating economic development, battling unemployment and improving education, health care and infrastructure.

All of these tasks are critical building blocks in the process of constructing peace. The concept of peace must incorporate social justice and material improvement that will benefit all people. During your first 100 days as Prime Minister you took several firm initiatives to promote peace and democratic reform in your country. A strong statement was made when you appointed women to 50 per cent of the ministerial posts in your cabinet. As a woman myself, I would say that this is a wise move. An equally wise move was the appointment of the world’s second Minister of Peace – another woman, naturally, Mrs. Muferihat Kamil, who is present here today. Even the President of Ethiopia is now a woman, in addition to which you have appointed a female Supreme Court Chief Justice.

Mr. Prime Minister, lifting the existing state of emergency was a matter of urgency for you. You granted amnesty to thousands of political prisoners, thereby acknowledging that opposition is part of a healthy political environment. Knowing that free speech is a cornerstone of democracy, you abolished public censorship and thereby enabled the development of a free and independent press. You have strengthened civil society by taking a strong stance against corruption and bribery in the public sector. You have declared a commitment to hold free and democratic elections, which are prerequisites for a true democracy. The Norwegian Nobel Committee stands behind you and supports your efforts for a democratic, peaceful society.

In recognizing your work by awarding you the Nobel Peace Prize, we were not expressing an opinion on how, or if, you should lead the Ethiopian people in the future. The leadership of Ethiopia and its political platform must be decided by the Ethiopian people and the Ethiopian people alone. Our award is based on the will of Alfred Nobel, and we recognize your endeavours as being in the true spirit of that will. You have chosen a path that we believe will consolidate peace and prosperity in your country.

Dr. Abiy Ahmed, we are aware that in the course of your life you have walked several different paths. You were born into a traditional family of simple means, to a mother who was an Amhara Orthodox Christian and a father who was an Oromo Muslim. Diversity seems to be part of your origin. As an adult you have had a long military career, including participation in a United Nations peacekeeping operation in Rwanda. Before permanently entering Ethiopian politics, you held the rank of Lieutenant Colonel. On top of that, you have been able to complete your PhD at the Institute of Peace and Security Studies at the University of Addis Ababa. Permit me to also add a personal trait to your list of merits: your profound humility – you rarely speak publicly of your achievements and success.

The complexity of your background has made you well suited for the third task encompassed in our acknowledgement of your achievements today, namely, your work for peace and reconciliation in the East Africa region.

You have put yourself at the disposal of your neighbours in the region to mediate disputes and conflicts. In Sudan you have mediated between the military regime and the civil opposition to find a transitional solution in the aftermath of Omar al- Bashir’s leadership. Your efforts have been much appreciated by the parties involved, and have resulted in the signing of a Draft Constitutional Declaration, which aims at ensuring a smooth transition to civil rule. You have also been engaged in peace and reconciliation talks in South Sudan, and have been willing to address the very real need of both Sudan and South Sudan to find and revitalize peaceful solutions to the great troubles that have afflicted their countries. Additionally, you have sought to mediate between Kenya and Somalia in their protracted conflict over rights to a disputed marine area. There is now hope for a resolution to this conflict. Finally, you have made crucial contributions to normalizing the diplomatic and political relationship between Djibouti and Eritrea.

You have demonstrated an understanding that peace among neighbours is essential in a troubled region. You have made common cause with all the stakeholders from Eritrea, Djibouti, Sudan, South Sudan and Kenya who have participated in promoting mediation and peaceful resolution. You represent a new generation of African leaders who realize that armed conflict and ethnic hostilities must be resolved by peaceful means. This year’s Peace Prize is a recognition of all the efforts made by all the nations and individuals involved.

They say that good news rarely arrives from the Horn of Africa.

Historically, good news did in fact come from Africa. Ethiopia is the cradle of humankind. The first Homo sapiens emigrated from the territory of your country. In this sense we are all Ethiopians. Your country has a unique history also within an African context, since it was never colonialized by any Western power. It is in part for this very reason that Ethiopia is home to the African Union.

The good news of today is your endeavours to establish a new order of peace initiatives, openness and peaceful mediation to find new solutions to old disputes. The Norwegian Nobel Committee fully understands that peace is created in cooperation with others. We are awarding the Peace Prize to you as an individual because you have personally made an extraordinary difference across several arenas. It is the totality of your efforts that convinced us that it is you, Mr. Prime Minister, who have made the most significant contribution to peace in the past year. In phrasing my statement this way, I am in fact quoting the terms of the will of Alfred Nobel. You have also fulfilled another requirement of his will, namely to strengthen fraternity, both between peoples and between nations.

The first African to receive the Nobel Peace Prize, Albert Luthuli, eloquently expressed the vision of the Peace Prize in his acceptance speech here in Oslo, on 10 December 1961. Speaking as a minister of the church shortly before the Christmas holidays, he said: “May the day come soon, when the people of the world will rouse themselves, and together effectively stamp out any threat to peace in whatever quarter of the world it may be found. When that day comes, there shall be “peace on earth and goodwill amongst men”, as was announced by the Angels …”

Albert Luthuli’s vision probably exceeded even Alfred Nobel’s imagination. But we can use it as an ideal and inspiration to create more justice, more fraternity and more peace. If we are to achieve that goal, we must get to work. That is exactly the job you have taken upon yourself, Mr. Prime Minister. Thank you.