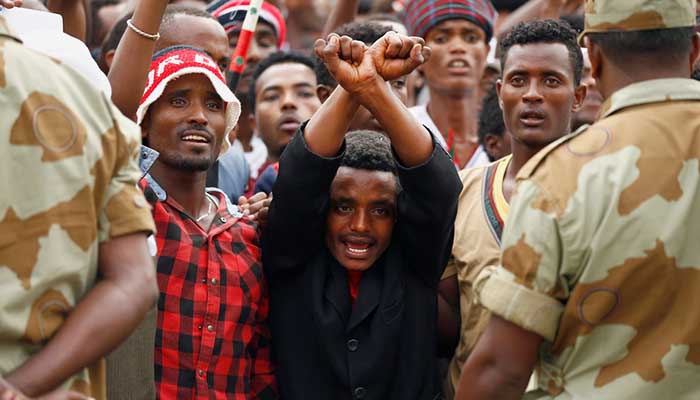 Ethiopia’s state of emergency: both sides are determined to fight to the finish

Waves of protests have gripped Ethiopia since last November. In response the government has declared a six month state of emergency. In an interview with The Conversation Africa’s Samantha Spooner, Asafa Jalata describes the impact of the state of emergency and what it could mean for the future of the country.

The Oromo protest movement emerged in November 2015. It has been fomenting for decades because the Oromo consider themselves colonial subjects. They are the largest ethno-national group in Ethiopia and have been denied equal access to their country’s political, economic and cultural resources.

For almost 25 years Tigrayan state elites have dominated different structures of the government, including the military. They have also had total control over other institutions such as the media. And they have confiscated fertile land and other valuable resources such as gold and other minerals.

Over the last few months, the protests spread across the country. Other ethno-national groups, which also feel politically and economically excluded by the Tigrayan-led minority government, have also joined the movement.

The Amhara, the second largest ethno-national group, started to protest peacefully against the Tigrayan-led minority government in August this year. They expressed their grievances and support for the Oromo protests in the Amhara regional state. Other ethno-national groups, known as the Konso, Sidama, and Gedeo joined more recently.

The protests gained further traction as the state’s reaction became violent. For example, in early October millions of Oromo gathered at Hora Arsadii, south east of Addis Ababa, for “Irreechaa” - the Oromo national holiday of thanksgiving. The Tigrayan-led regime’s army killed more than 700 Oromos and injured hundreds. This was sparked by peaceful, anti-government chants by young Oromos.

After the massacre, Oromo protesters burned property and both locally and internationally owned businesses that had been built on the land seized from the Oromo by Tigrayan state and business elites.

The Ethiopian regime’s response was to declare the state of emergency. Set to last six months, its aim is to curb the growing anti-government protest movement.

What impact has this state of emergency had on the various communities in the country?

The current state of emergency is the last attempt by the Tigrayan-led regime to stop the Oromo and Amhara protests and to stay in power. The government is therefore using this situation to gain total control over information, use heavy force and deny the freedom of organisation and association.

As a result, the regions of Oromia, Amhara, Ogaden, Konso, and Gedeo have become conflict zones with the regime indiscriminately imprisoning, looting and killing protesters.

According to the state of emergency rules, Oromos, Amharas and Konsos have restricted access to media. They are not allowed to listen to radio stations, such as the Oromo Voice Radio, or to watch media channels, like the Oromia Media Network. Ethiopian soldiers are enforcing these rules and have been seizing or breaking satellite dishes.

The emergency rules also prevent citizens from associating with political organisations that the regime has branded as “terrorist”. One of these is the Oromo Liberation Front which was established in 1973 by Oromo nationalists to promote self-determination.

The situation for the Oromo people is dire. For several months the region has been under a crackdown enforced by special police groups and the army known as “Agazi”. According to rights organisations, more than 2 000 Oromos have been killed in eleven months. Several thousand more have been imprisoned, tortured, blinded and raped.

The rule of law no longer seems to apply to the Oromo and their supporters. To hide its crimes from the international community, the regime has blocked the internet and collected phones from thousands of Oromos.

Until the regime is overthrown they will continue to suffer immensely. They are being excluded from state support in relation to protection, food, shelter, clothing, medicine and other necessary services.

As a group is the Oromo community concerned about their future?

Because the current regime fears the size of the Oromo population, it tries to minimise their influence through hidden policies and war. The regime has already prevented Oromo representatives from coming into political power through systematic killings, imprisonment or exile. For these reasons, the Oromo are very concerned about their future.

In addition, little looks set to change as a result of external pressure because international powers such as the United States as well as organisations such as USAID have a close relationship with the regime. This gives rise to concerns within the Oromo community that their grievances will not be heard and that they will not be given support.

Nevertheless the Oromo people are determined to change their status quo and better their future. That is why they continue with their movement, despite massive incidents of death and imprisonment.

What are the prospects for the government and leaders of the protest movement meeting to resolve the political issues between them?

Resolving the conflict requires the implementation of social justice and democracy. But the Ethiopian regime has demonstrated that it will dictate everything to the Oromo people and its leadership through the barrel of the gun.

The Oromo are rejecting this heavy-handed approach. So, in this conflict, there are two options – either the regime must go, and the Oromo be victorious, or the Oromo people must be destroyed to serve the interest of the regime.