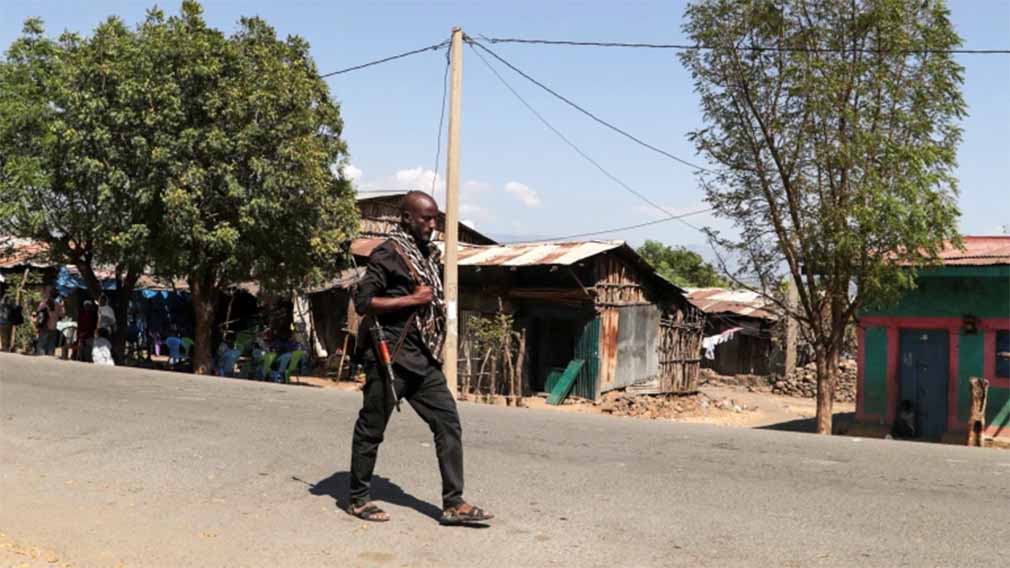 (Aljazeera) Leaders of Ethiopia’s northern Tigray region on Saturday claimed rocket attacks on two airports in a nearby region and threatened to strike neighbouring Eritrea, raising fears that the escalating conflict could spread.

Two airports in Amhara state were targeted late on Friday with one of the rockets hitting the airport in Gondar, partially damaging it, said Awoke Worku, spokesperson for Gondar central zone. A second projectile fired simultaneously landed just outside of the airport at Bahir Dar.

A doctor told AFP news agency two military personnel were killed and up to 15 injured in Gondar.

The Amhara regional state’s forces have been fighting alongside their federal counterparts against Tigray’s fighters.

“In the late hours of November 13, 2020, a rocket was fired towards Bahir Dar & Gondar cities. As a result, the airport areas have sustained damages,” a government statement said on Saturday.

“The TPLF [military government] is utilising the last of the weaponry within its arsenals,” it added, referring to the Tigray People’s Liberation Front (TPLF), Tigray’s governing party.

Tigray’s state government said the attacks were in retaliation for recent air strikes by the federal government on the region.

“Yesterday evening we’ve inflicted heavy damages on the military components of the Gondar and Bahir Dar airports,” Getachew Reda, a senior member of the Tigray People’s Liberation Front (TPLF), said in a statement.

“We will conduct missile attacks to foil military movements in Massawa and Asmara,” Getachew added, referring to cities in Eritrea.

The airports in Bahir Dar, the regional capital, and in Gondar are used by both military and civilian aircraft. An Ethiopian Airlines worker who did not wish to be identified said flights to Gondar and Bahir Dar airports had been cancelled after the attack.

Residents also reported hearing gunfire in both cities on Friday night, though an Amhara regional government statement said “the situation was controlled within a few minutes” and “our cities are in peace”.

Fears of ethnic targeting are rising. The Tigray regional government in a statement denied allegations that scores or even hundreds of civilians were “hacked to death” on Monday in the regional town of Mai Kadra.

The massacre was confirmed by Amnesty International, which cited a man helping to clear away bodies as saying many of the dead were ethnic Amharas.

“The team will carry out an investigation that will be made public,” he said.

Ethiopian Prime Minister Abiy Ahmed last week launched military operations in Tigray, saying the move was provoked by TPLF attacks on federal military camps in the region – a claim the TPLF has denied.

However, a top TPLF official appeared to confirm the federal government’s claim that TPLF forces sparked the conflict by attacking a military base.

Sekoutoure Getachew in a video discussion said pre-emptive strikes were carried out in self-defence against the Ethiopian army’s Northern Command, calling it an “internationally known practice”.

The conflict in the Tigray region has killed hundreds, sent thousands of refugees flooding into Sudan, and raised fears it may draw in Eritrea or force Ethiopia to divert troops from an African force opposing al-Qaeda-linked fighters in Somalia.

The United Nations, the African Union, and others are concerned the fighting could spread to other parts of Ethiopia, Africa’s second-most populous country, and destabilise the wider Horn of Africa region.

More than 14,500 people have fled into neighbouring Sudan with the speed of new arrivals “overwhelming the current capacity to provide aid”, the UN refugee agency said on Friday.

Ethiopia’s Human Rights Commission, appointed by the government but independent, said it was sending a team of investigators to the town of Mai Kadra to look at evidence of mass killings.

The commission will investigate any human rights violations in the conflict, it said in a statement

Tigray has been under a communications blackout since the operation began, making it difficult to verify claims from both camps about the situation on the ground.

Abiy accuses TPLF, which governs the mountainous region of more than five million people, of treason and “terrorism”.

Federal troops say the TPLF rose against them last week but they have since survived a siege and recaptured the west of the region.

The TPLF says Abiy’s government has systematically persecuted Tigrayans since he took office in April 2018 and calls the military operations an “invasion”.

Federal troops have been carrying out air raids and there has been fighting on the ground since November 4.

Military officials have promised to keep the conflict contained in Tigray, and Abiy has repeatedly promised a quick, decisive victory.

But Amhara and Tigray are embroiled in long-running disputes over land along their shared border that analysts worry could draw Amhara into the conflict.

One resident of Bahir Dar told AFP there were “two heavy explosions around 10:50pm”.

“After that, there was gunfire for 15 minutes, and then it went quiet,” the resident said.