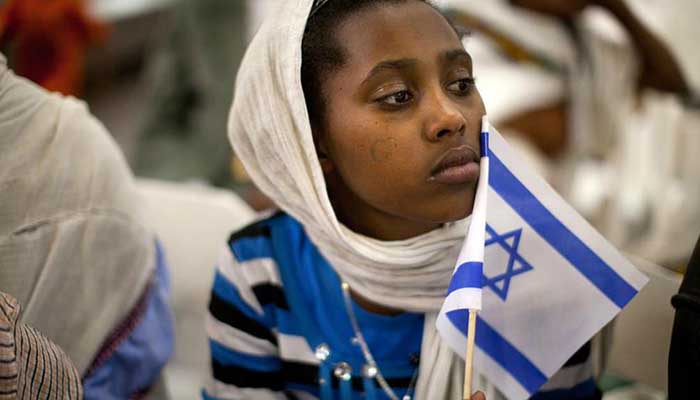 For more than three decades, the story of Operation Moses - the mission to airlift thousands of Jews from Ethiopia and absorb them in Israel - has been a source of pride for many supporters of the Jewish state.

Even today, it is often recalled as an exception to the racist rule, a rare episode in which black people were not taken out of Africa to be enslaved, but rather, in order to be liberated.

Putting aside the erroneous Euro-centric assumption that Israel is not an integral part of the African continent itself, the zionist narrative which frames Israel as an anti-racist savior is highly problematic.

On the 32nd anniversary of the conclusion of Operation Moses, it is high time to set the record straight: Israel only brought black people to the country under duress; and since their arrival, it has treated them worse than any other Jews.

Last July, Israeli national television Channel 1 finally broke their silence on a story that this journalist had reported a year earlier – one that Ethiopian activists had been trying to call attention to for years.

The 15-minute expose asked the question: Why did Israel only began to bring black folks to the country in 1984, when the state had already been in existence since 1948? The Israeli government had facilitated Jewish immigration since its very inception, so why did it wait 36 years to start admitting Black Jews?

The 2016 PhD thesis of Israeli academic Dr. Chen Tannenbaum-Domanovitz shed light on this question, shattering one the of the most prevailing myths of zionist hasbara.

Poring over the past correspondence of the Israeli government and para-statal groups like the Jewish Agency, Tannenbaum-Domanovitz revealed that for decades, Israeli leaders not only didn't help Ethiopian Jews to immigrate, but in fact actively hindered them - for plainly racist reasons.

At first, Israeli authorities refused to accept the possibility that Ethiopians, dark-skinned sub-Saharan Africans, could be Jews. When they discovered that the Ethiopian version of the Jewish religion was closer to the praxis of ancient Israelites than their European or Middle Eastern counterparts, officials began to claim that Ethiopian Jews stood little chance of successfully integrating into Israeli society, on account of their "primitive" agricultural lifestyles.

After Israel's 1973 Yom Kippur war with Egypt and Syria, Ethiopian head of state Haile Selassie cut off all relations with Jerusalem. The diplomatic fallout with the Abyssinian emperor then became the new excuse touted by the Israeli government for its supposed inability to bring Ethiopian Jews to the country.

At the same time, however, the lack of bilateral relations with the USSR did not prevent Israel from coordinating the arrival of white Jews from the Soviet Union.

Once Ethiopian Jews finally started arriving in the country in 1984, Israel started to repeat some of the same mistakes it had made with other immigrants of colour, directing them to live in the periphery of the country, where economic advancement is much more difficult.

The government's underlying premise - that the movements of people of colour could be controlled - filtered down to Israeli racists, who soon organised secret pacts amongst themselves to keep Ethiopian emigres out of their neighbourhoods and schools.
Two decades ago, it first emerged that following a government directive, Israeli medical services were secretly destroying all blood donated by Israelis of Ethiopian origin. Although Israel has consistently promised to end the practice, it has remained in effect for twenty years, occasionally triggering another round of Ethiopian outrage. Less than a month ago, the government once again vowed that it would do so, for the umpteenth time.

Perhaps most insulting of all have been Israel's efforts to limit the number of Ethiopians living in the country. Mostly, this has consisted of impeding the immigration of the Falashmura, relatives of Ethiopian Jews already living in Israel.

But it has also manifested as pressure put on Ethiopian Jewish women to be injected with Depo Provera, a long-acting birth-control drug, sometimes as a condition for being allowed to immigrate to Israel. As a result of these injections, the birth rate of the Ethiopian community was found to have plummeted.

Over the decades, the Ethiopian community in Israel has showed great restraint in the face of systemic state racism.

Every few years, another story of scandalous maltreatment at the hands of Israeli officials is reported, triggering a series of street protests by Ethiopian emigres that are largely ignored and soon forgotten.

But that pattern was broken in the spring of 2015, when footage of Tel Aviv-area police officers beating an Israeli soldier of Ethiopian origin went viral.

The video seemed to ignite the anger of community youth in a way that previous disgraces hadn't. Thousands of Ethiopian-Israelis took to the streets of Jerusalem and Tel Aviv to vent their anger and to demand equal treatment, regardless of their skin color.

Unsurprisingly, the Netanyahu government responded to the Ethiopian protests with the same cynical tactics employed by his predecessors: Hollow promises to fix the problems that aren't followed up with the necessary action.

But if lip service would have sufficiently pacified protestors in the past, it is proving to be far from satisfactory to the latest wave of Ethiopian activists. The current crop of Ethiopian organizers is eschewing the conservatism of their parents' generation; they are accusing the state of serious crimes, and are using loaded language to do so.

Moreover, they are not limiting their protests to marching in the street; of late, they have begun to test out more radical tactics.

In recent months, over four hundred Ethiopian emigres have signed a public petition declaring that if they are called up for military reserve duty in the Israeli army, they will refuse to show up, in protest of institutional racism against their community.

Despite the obvious significance of a refusal movement of this size, however, mainstream media both inside and outside of Israel have for the most part ignored the protests by the Ethiopian reservists - just as they have neglected to report on the problems being protested to begin with.

It would seem that the myth of Israel's magnanimous ingathering of Ethiopian Jews remains a powerful one, even 32 years after the fact.

Today in 2017, Operation Moses continues to dominate the discourse about the relationship between Black people and Israel, despite the state racism that delayed the migration by decades, and despite the discriminatory treatment that has increasing numbers of Ethiopian-Israelis wondering whether it was all worth it.