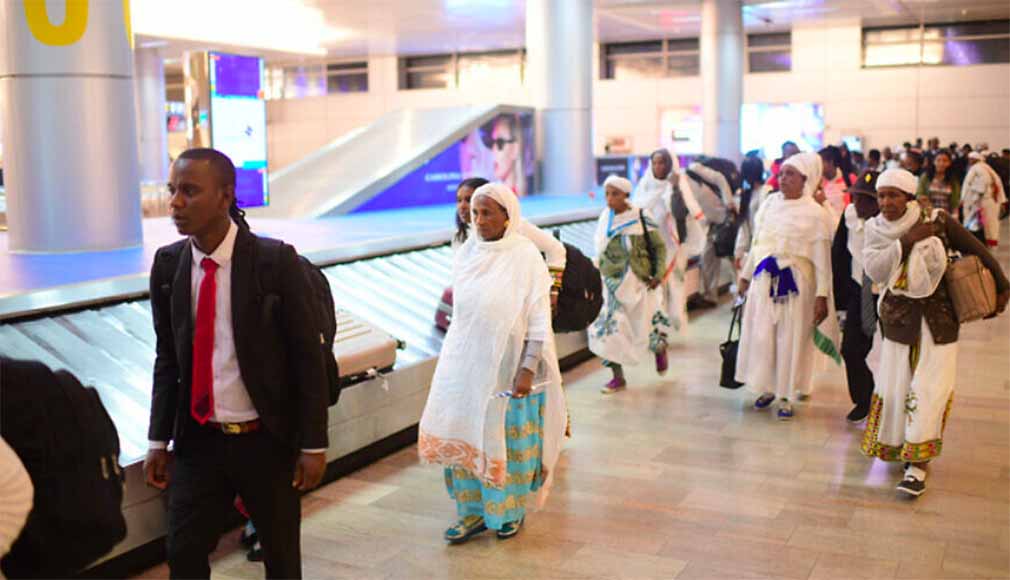 (February 11, 2020 / JNS) The Israeli government’s recent approval of a plan to allow nearly 400 Ethiopian Jews from the Falash Mura sect to immigrate to Israel has touched off political controversy in the country.

Following Sunday’s Cabinet approval, Israeli Prime Minister Benjamin Netanyahu said the move, which aims to reunite the Falash Mura with family members already living in Israel, was “just an additional step” in the process of aliyah from Ethiopia. In 2015, Netanyahu’s government passed a decision to bring all members of the Ethiopian Jewish community to Israel, but the plan has not been implemented largely due to budgetary issues.
“I am proud that as prime minister I brought thousands of Ethiopian brothers and sisters to Israel. We, of course, plan to continue doing so. This is just an additional step,” said Netanyahu.

Former Likud MK Avraham Neguise, a member of the Ethiopian Israeli community, thanked Netanyahu following the announcement of the decision, and denied accusations the move was tied to the country’s upcoming elections.

“I thank the prime minister and the minister of absorption who accepted my ongoing demand to continue the immigration from Ethiopia,” Neguise told JNS. “This government decision is not connected to the election and has been on the table since my first day in the Knesset in 2015. The decision to allow the immigration of these 400 is not a new one; it is the number that was set in 2018, and a budget was already transferred for this in the last Knesset,” he added.

The Falash Mura’s ancestors were forced to convert to Christianity during the 19th and 20th centuries, and many in the 8,000-strong community have close relatives who have already moved to Israel. However, while more than 80 percent of the Falash Mura in Ethiopia say they have first-degree relatives already living in Israel, since they are officially not Jewish they are not eligible for automatic Israeli citizenship under the country’s Law of Return and must receive special government permission to immigrate, and then undergo a conversion process once they arrive.

Sunday’s decision met with opposition from Israeli Attorney General Avichai Mandelblit, who argued that it could be perceived as an election ploy. Mandelblit also argued that there has not been sufficient preparation for the move, and that not enough data had been gathered regarding the applicants for immigration.

The Cabinet decision comes as the Likud Party leads efforts to increase its support among the country’s Ethiopian community ahead of the country’s March 2 elections. Pollsters estimate that as many as two seats may have shifted from Likud to the Blue and White Party in the September election due to anger and disappointment over what the community sees as government neglect of its needs. Last July, nationwide protests took place in Israel by Ethiopian Israelis upset over the shooting death of 18-year-old Solomon Teka by a police officer.

The party even convinced former Blue and White Knesset member Desta Yevarkan, an Ethiopian Israeli, to defect to the Likud.

Netanyahu’s opponents were quick to pounce on the approval, with Blue and White leader Benny Gantz accusing the prime minister of “carrying out a cynical election campaign on the backs of Jews left behind in Ethiopia and their families here who he has neglected for a decade.”

Blue and White MK Penina Tamano-Shata, the first female Ethiopian-Israeli Knesset member, told JNS that “Netanyahu holds the Ethiopian Jews waiting to move to Israel as hostages for elections. He plays with people’s lives in his political games, instead of bringing all those who have a right to move to Israel immediately. He has been prime minister for 10 years, and what has he done?”

Alisa Bodner, spokesperson for the grassroots organization called the Struggle for Ethiopian Aliyah, told JNS that “if the government can approve 400 immigrants ahead of the election then they can approve the aliyah of 7,500 more.”

The group is planning to hold a rally next Wednesday night in Jerusalem to demand that Israel bring to Israel all Ethiopian Jews waiting to immigrate and not just the relatively small amount included in this week’s government decision.

Attorney Emanuel Hadane, son of the chief rabbi of Israel’s Ethiopian community, told JNS that “we in the community don’t get caught up in the politics. The timing doesn’t matter. Let it be one day before the election. What’s important is that as many of our brothers and sisters as possible be brought to Israel.”

Former MK Neguise told JNS, “I won’t stop fighting until all Ethiopian Jews move to Israel. The suffering of the separated families must come to an end. If the government does not continue to bring them then the battle will intensify. Aliyah of Jews from all around the world is the foundation of the existence of the State of Israel, and not bringing any Jews to Israel is a stain for Zionism.”

During Sunday’s Cabinet meeting, Netanyahu also announced the creation of a committee to investigate the police’s handling of accusations of mistreatment by members of the Ethiopian community. The attorney general took issue with this decision as well, saying that could actually be a violation of election law, which prohibits offering benefits to influence the vote.

Netanyahu declared that he is “dedicated to the full integration of the community into Israeli society,” and that his government is “continuously working towards that goal and will continue to do so.”