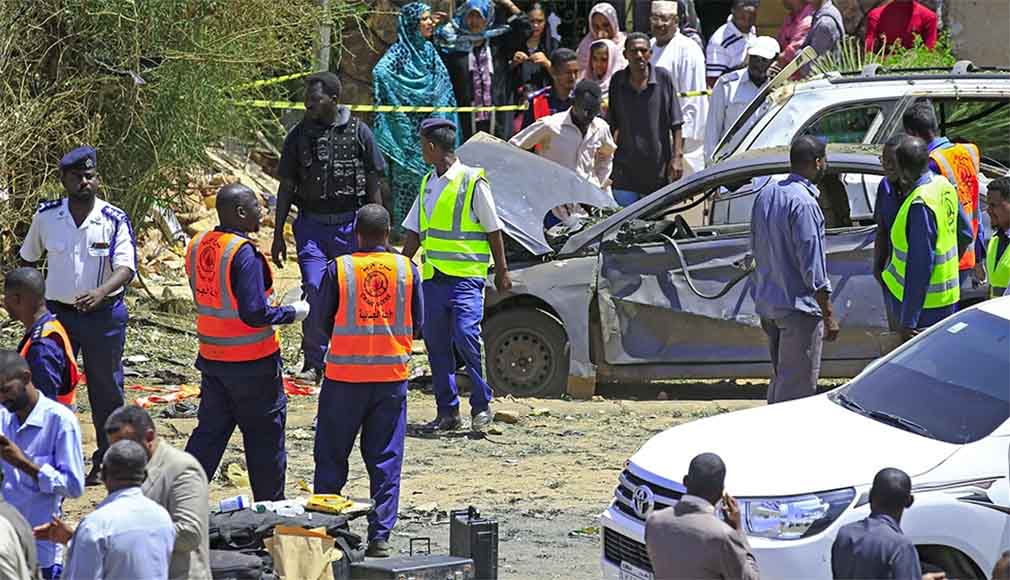 Sudan’s prime minister survived an assassination attempt Monday after an explosion went off near his convoy in the capital of Khartoum.

Sudan, Khartoum (March 9, 2020) - Abdalla Hamdok, a longtime economist, tweeted he was “safe and in good shape” following the explosion. Sudanese state TV said Hamdok had been heading to his office when the attack took place.

Hamdok also tweeted a photo of himself smiling and seated at his desk, while a TV behind him showed news coverage reporting he’d survived.

The attack highlighted the fragility of Sudan’s transition to civilian rule, almost a year after pro-democracy protesters forced the military to remove autocratic President Omar al-Bashir from power and replace him with a joint military-civilian government, which has promised to hold elections in three years.

However, the military generals remain the de facto rulers of the country and have shown little willingness to hand over power to civilians.

Hamdok, in his brief statement on Twitter, said, “Rest assured that what happened today will not stand in the way of our transition, instead it is an additional push to the wheel of change in Sudan.”

No one immediately claimed responsibility for the attack. Faisal Saleh, Sudan’s information minister and interim government spokesman, said the attack was carried out using both explosives and firearms, and that a security officer was lightly wounded.

Footage posted online showed two white, Japanese-made SUVs vehicles typically used by Sudan’s top officials parked on a street, damaged with its widows broken. Another vehicle was badly damaged in the blast. Several dozen people were seen in the site of the attack, chanting: “With our blood and soul, we redeem you, Hamdok.”

The protest movement that led the uprising against al-Bashir called the blast a “terrorist attack.” The statement by the Forces for the Declaration of Freedom and Change called on people to take to the streets to “show our unity and cohesion … and protect the transitional authority.”

After months of negotiations, the military and the pro-democracy movement reached a power-sharing deal in August, at which point Hamdouk took office. The deal established a joint military-civilian, 11-member sovereign council to govern Sudan for the next three years.

Prominent activist Khalid Omar, secretary general of the Sudanese Congress Party, said the attempt on Hamdouk’s life was a “new chapter in the conspiracy against the Sudanese revolution.”

The U.S. Embassy in Sudan tweeted: “We continue to support Sudan’s civilian led transitional government and stand in solidarity with the Sudanese people.”

Irfan Siddiq, the British ambassador in Khartoum, said the blast “is a deeply worrying event must be investigated fully.” He tweeted that the Sudanese prime minister’s office had confirmed Hamdok and his team “are all fine, with no injuries.”

Monday’s blast came less than two months after an armed revolt from within Sudan’s security forces shut down the capital’s airport and left at least two people dead. The tense stand-off between the armed forces and rogue intelligence officers paralyzed street life in several parts of Khartoum, along with another western city.

In 1989, al-Bashir came to power in an Islamist-backed military coup and imposed a strict interpretation of religion on its citizens, limiting personal freedoms. The country was an international pariah for its support of extreme Islamists.

Sudan’s transitional authorities announced in February that they agreed to hand over al-Bashir to the International Criminal Court along with other former officials wanted by the ICC.

Hamdok has confirmed the government will cooperate with the court’s efforts to prosecute those wanted for war crimes and genocide in connection with the Darfur conflict in Sudan in the 2000s.

Sudan’s transitional government has also been under pressure to end wars with rebel groups as it seeks to rehabilitate the country’s battered economy, attract much-needed foreign aid and deliver the democracy it promises.

Nearly a year after al-Bashir’s ouster, the country faces a dire economic crisis. Inflation stands at a staggering 60% and the unemployment rate was 22.1% in 2019, according to the International Monetary Fund. The government has said that 30% of Sudan’s young people, who make up more than half of the over 42 million population, are without jobs.