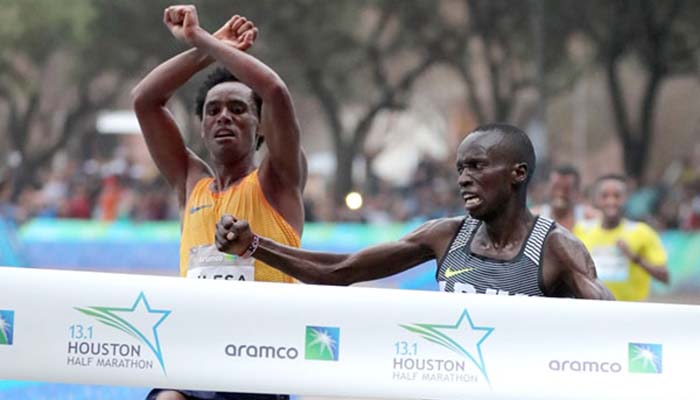 In a spectacular sprint finish, U.S. Army runner Leonard Korir edged out Olympic silver medalist Feyisa Lilesa for a victory at the Houston Half Marathon. It’s Korir’s second major win in two weeks, as he beat Mo Farah and a slew of top Americans in a cross country 8K in Edinburgh last Saturday.

Korir and Lilesa both ran 61:14. For most of the last four miles, they were in a pack of four with Hiskel Ghebru and Fikadu Tsadik of Ethiopia. That quartet was together until maybe 300 meters to go, when Lilesa made the first move. But Korir was able to cover the move, and as the two jostled over the last 10 meters, Korir crossed in front.

After Korir covered Lilesa’s move, he put his right hand on Lilesa’s hip in order to stay on his feet, then never gave up his miniscule lead. Both celebrated as they crossed but it was clear that Korir won. Watch:

Hasay’s clocking was particularly impressive, as the humidity inched up to 99% over the course of the morning in Houston.